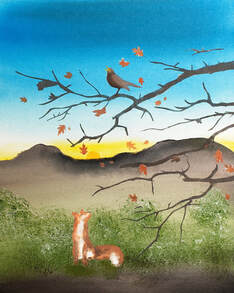 In The Beginning
​
As a very young child I was diagnosed with the rare condition PXE (Pseudoxanthoma Elasticum). Whilst very little was known about it at the time, I'd been advised that at some point in my life it could cause my eyesight to deteriorate.
​
I led a normal life up until my 50s. I studied graphic design at Harrow School of Art 1967-1970 and went on to work in the Reader's Digest book publishing department before leaving to bring up my three children. I enjoyed dabbling in silk screen printing, painting and photography but there was always a nagging feeling in the back of my mind that there was more I could achieve.

In 2004, my eyes started to show signs of haemorrhaging. Even with treatment over the next couple of years, my central vision could not be saved and I am left with peripheral vision only.

Amazingly, it was at this point with my eyesight failing, that I found the wherewithal to really commit myself to my art. I found renewed creative energy and despite not being able to use conventional techniques as before, I had a new determination to paint what was in my mind’s eye! ​ 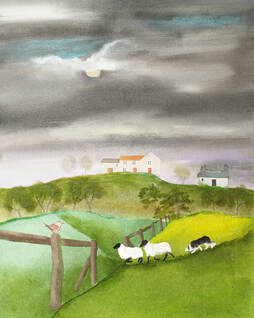 One Idea Leads To Another

For many months I was totally frustrated just thinking I couldn't do it. Then I had an idea - perhaps I could take leaves from trees and plants and sort of stencil them to explore where that took me. It was a scary moment because I couldn't bear for it not to work. So, looking at the canvas as though I was looking through a pane of frosted glass, distorted and blurry, I slapped paint on and around a load of leaves, trying to form some sort of design.

The first attempts were absolutely awful and I burnt them on the bonfire. The whole process was fraught with moments of tearful frustration. I kept at it and after many repeated attempts, stopped trying to paint as if I had normal eyesight. It was all a bit rough, random and unusual and even though it was rather abstract, which wasn't the intention, I told myself it didn't matter. Eventually, it became apparent that I'd developed an unconventional technique of my own.

Painting around piles of leaves is all very well but I had other images in my mind that I wanted to express. I tried to create scenes with the leaf and plant idea, but I really needed the odd animal or bird to give more interest. Here, I have to admit, that I resorted to searching online for suitable images as an aid. I enlarged and printed them onto card. I persuaded my husband to cut them out with a scalpel in order to create a stencil for me to work with. My first attempts were very crude. 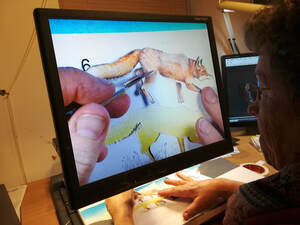 Even a patient husband gets bored of cutting out animals, fences, moons and ships. I needed a way of doing that part without his help. I turned to my wonderful Optelec video magnifier which magnifies up to 60X. Until now, I had only used it for writing cheques, reading labels and recipes and cleaning my nails! I bought a cutting board to place on the base and a new box of scalpel blades. Under the magnifier I was able to do the cutting out myself and even be a little more creative.

Oil seemed the best choice of medium and I used brushes with sawn-off handles so they could fit under the enlarger. Also, to get the right effects, I used conte crayon, pencil, felt pens, bits of torn up sheet, my fingers and anything else I could find that would help me create what I was after. For areas of sky, sea or hills I masked off sections with frisket film which didn't always adhere to the paint if it was not completely dry, so I used masking tape to hold down the edges and it often got pretty messy and out of alignment. Actually it still does . . . . ​​ 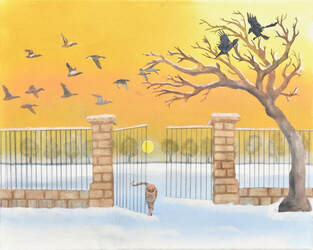 The Journey Continues
​
Without the deterioration of my sight, I don't think I would've become the person I am today and this has enabled me to drop many previous notions of what art should be. The need to re-address my technique has given me permission to play with new ideas, with no expectations and absolutely no pressure to achieve a certain standard other than my own.  Consequently, I've developed a more personal, albeit unconventional style.

It took a while for me to realise that even with my disability, I was able to visually interpret my thoughts and my creativity has been re-kindled.